Under certain conditions the liquid ring vacuum pump capacity can be increased substantially for a given speed and power consumption.  This article is written as a technical overview of the thermodynamics behind this windfall in power savings.

The liquid ring vacuum pump is a constant volume device, which means that at a given speed the volume of gas taken in will be a constant. If the gas steam coming to the vacuum pump contains a condensable vapor, and the vapor is condensed before it is drawn into the bucket of the liquid ring pump, the gas will occupy less space than it had before the gas was condensed. Since the pump draws in a constant volume, a measurement of the flow before condensation (this is what you care about, the flow at your filter or couch roll or uhle box, for instance) will be higher than the capacity of the vacuum pump as stated in the pump curves.

If we now cool the mixture to 80°F, the air will decrease in volume by the ratio of absolute temperature, or

cubic feet. The water at 80°F will have a saturated vapor pressure of 1.03”Hg or

This is the volume increase because of temperature drop and condensation. So you can run the vacuum pump 15.5% slower and save 21.7% on horsepower than you would if you did not have the condensation effect.The chart below shows the percentage gains at some other temperatures. 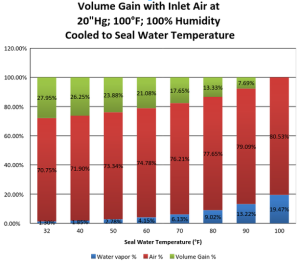 This gain in capacity and decrease in power is almost free. The cost is an increase in the heat produced by the vacuum pump. The heat increase is equal to the energy released when the water condenses. The energy released heats the sealing liquid. This can be an issue depending upon the cost of the sealing fluid and its treatment if it is recirculated.  In our pump tests in the Pacific Northwest where the humidity is usually around 50% and there is no condensing effect, the seal water temperature rise across the pump is usually about 7°F. For our customers running paper machines with air at 100°F and 100% humidity, the temperature rise can be as much as 30°F.

The above example is clean and theoretical; in actual practice other factors enter the equation. Be aware that some manufacturers have published curves that include the condensation effect, therefore increasing the stated capacity by about 10%. We do not do this as we calculate each case individually and are transparent with the customer in the pump size we recommend for their application and explain all of the assumptions that we make. Call us with your questions, we like to solve your problems.